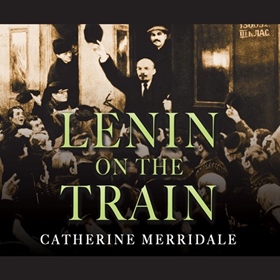 LENIN ON THE TRAIN by Catherine Merridale | Read by Gordon Griffin

Recounting perhaps the most famous train ride in history, this audiobook tells the story of Vladimir Lenin’s return to Russia from exile in Zurich. Once home, he became the leader of the Russian Revolution in 1917, which changed the world then and still impacts us now. This year marks the 100th anniversary of the event and gives us a chance to weigh its importance. Narrator Gordon Griffin’s bright timbre and lively British accent enhance this history by moving the story along at a brisk pace. He reads expressively, emphasizes key words, and effectively dabbles in characters. He even telegraphs the anger or frustration various people feel as the proceedings unfold. The result is a retelling of the story that a new generation can learn from. R.I.G. © AudioFile 2017, Portland, Maine [Published: JULY 2017]

OPEN HEART by Steve Westerby Narrator Gordon Griffin captures the empathy, frustration, and passion of Dr. Stephen Westaby, a pioneering heart surgeon in Britain. Westaby has conducted all manner of high-risk surgeries, including implanting artificial heart pumps before any other British doctor had done so. (The patients have no pulse afterwards!) He is snarky about bureaucrats who are more interested in keeping down costs than in doing anything new or investing in technology that save lives, and he has plenty of insults for the National Health Service. Griffin’s narration is wonderful–lively and expressive, with an accent that suggests Westaby’s working-class background. Griffin’s timing and tone perfectly capture Westaby’s wry, almost curmudgeonly, sense of humor–he quips that a patient is so sick he is unlikely to survive a haircut, but after an artificial heart is implanted, he lives for several years. A.B. © AudioFile 2017, Portland, Maine [Published: SEPTEMBER 2017]